Last week, I was lucky enough to get a call from a doula in need of some help.  The mom she was assisting had been in labor for over 24 hours but not progressing past 1 cm.  The doctors at the hospital didn’t believe she was in active labor so they turned her away and told her to come back next week! Instead of going home, they went to a nearby park to walk and get the baby moving.  They worked most of the morning trying to get labor to pick up but things weren’t changing much.  Cara, her doula, let me know that the mom wanted to try an adjustment to free any constraint in her uterus that wasn’t allowing her baby to drop into the pelvic cavity.  When I arrived at the park, I found a very tired mom!  She had been going through full contractions for over a day and was getting worried that she wouldn’t have the energy to get through the birth.  She was also attempting a VBAC after a failed induction with her first ended in a C-section and was nervous about the possibility of having another one.  I gathered all my equipment and we found a nice flat grassy area to begin the adjustment. 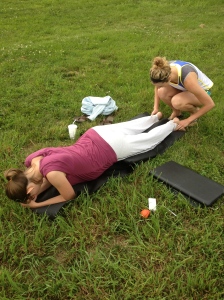 Although the baby wasn’t breech I used the Webster technique to free up any constrained areas in her pelvis and sacrum.  The uterus attaches itself to these structures by way of ligaments.  If the pelvic or sacral bones are misaligned it can cause these ligaments to be stretched or asymmetrical, leading to prolonged labor, painful decent, breech babies, and ineffective contractions, etc.  When checking her, I noticed her sacrum was not moving the way it should on the right side so we adjusted it and then addressed the ligaments on the front side of her belly.  She also had some neck misalignments that could have been affecting her autonomic nervous system, which is responsible for the coordination of all the tissues, organs, and glands, so we adjusted that too.

As I left the couple to continue to work through contractions, I had a great feeling about the upcoming hours.  I heard from their doula once more that day…telling me they had their successful VBAC!  Her contractions started picking up right after the adjustment and they went back to the hospital.  No one there believed she had progressed since the morning but they insisted and were finally admitted.  She was progressing well and had their baby that evening.

It’s days like these that remind me how much I love what I do.  Chiropractic is amazing and can do great things!  This is yet another reminder of how powerful an adjustment can be.  By freeing up the interference on your nervous system, your body can function like it should!  (Which is pretty important when birthing a baby!)  I’m so grateful to have been a part of the couple’s day and to have a gift I could share with them.

I am a chiropractor committed to educating as many people possible about chiropractic. I wake up each day loving what I do! My goal is to change people's lives through chiropractic so that they can live to their greatest potential. View all posts by Dr. Andrea